Skip to content
Brute Force One of hacking way used application programs to decode encrypted data such as passwords or Data Encryption Just as a criminal might break into, or “crack” a safe by trying many possible combinations, a brute force cracking application proceeds through all possible combinations of legal characters in sequence. Brute force is considered to be an infallible, although time-consuming, approach.

To help prevent dictionary brute-force attacks many systems will only allow a user to make a mistake in entering their username or password three or four times. If the user exceeds these attempts, the system will either lock them out of the system or prevent any future attempts for a set amount of time.

Today i will provide example how to crack oracle password using Tools called orabf  please remember it’s only example and there’s million tools can do the same i will mention it later in this Topics and work on them in another thread.

Orabf is an extremely fast offline brute force/dictionary attack tool that can be used when the particular username and hash are known for an Oracle account.  Obviously the speed of the brute force attack slows down the longer the amount of characters that it is trying to brute force with but for short username/hash combinations it can be over a million tries per second.

Check the below example : 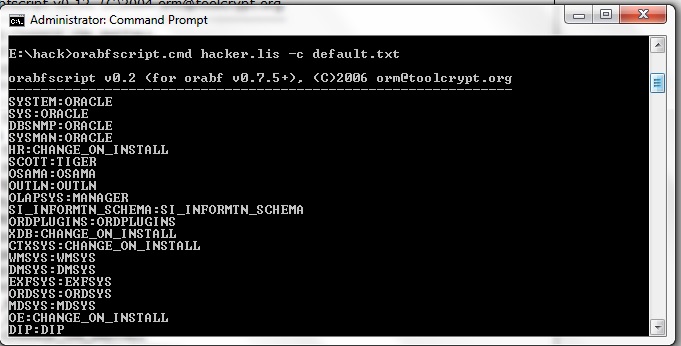 Because i am using version 0.7.5 the command should be like :

Remember Default.txt is the file already exist in the software and output append inside this file.

Small trick !!! i will provide another example using another software such as :

Osama considered as one of the leaders in Cloud technology, DevOps and database in the Middle-East. I have more than ten years of experience within the industry. moreover, certfied 4x AWS , 4x Azure and 6x OCI, have also obtained database certifications for multiple providers. In addition to having experience with Oracle database and Oracle products, such as middle-ware, OID, OAM and OIM, I have gained substantial knowledge with different databases. Currently, I am architecting and implementing Cloud and DevOps. On top of that, I'm providing solutions for companies that allow them to implement the solutions and to follow the best practices. View all posts by Osama Mustafa

This site uses Akismet to reduce spam. Learn how your comment data is processed.